Born on April 23, 1996 in Lleida, Alex Márquez has lived surrounded by motorcycles practically from this first day and soon found himself fascinated with everything related to the world of two wheels.

When he was little he said that he wanted to be a mechanic for his brother, but he soon realized that he also wanted to take the handlebar and squeeze the throttle to the maximum.

There are few combinations more infallible than talent, work and humility to end up being a great rider. But if you also add a family passionate about motorcycles and a brother, Marc, who has been breaking barriers in all the competitions he has gone through, it is evident that the fate of Alex Márquez would lead him sooner or later to shine and become a name in motorcycling.

At eight years old, Alex had already started competing and fighting for victory in the 50cc PromoRacc and followed him up with the Catalonian Championship title. He progressively burned stages until his debut in 2010 in the Spanish Speed ​​Championship. In 2012 he achieved the 125cc Spanish Championship in the CEV and in 2013 he already did his first full World Championship in Moto3.

From here on, the story of Alex Márquez is well known, two-time World Champion with the Moto3 Titles in 2014 and Moto2 in 2019. At the end of 2019, he joined the Repsol Honda Team with his brother Marc Márquez as a teammate for the 2020 season. In 2021 Alex Márquez continues as a Honda rider in MotoGP with the LCR Honda Team for two more seasons. 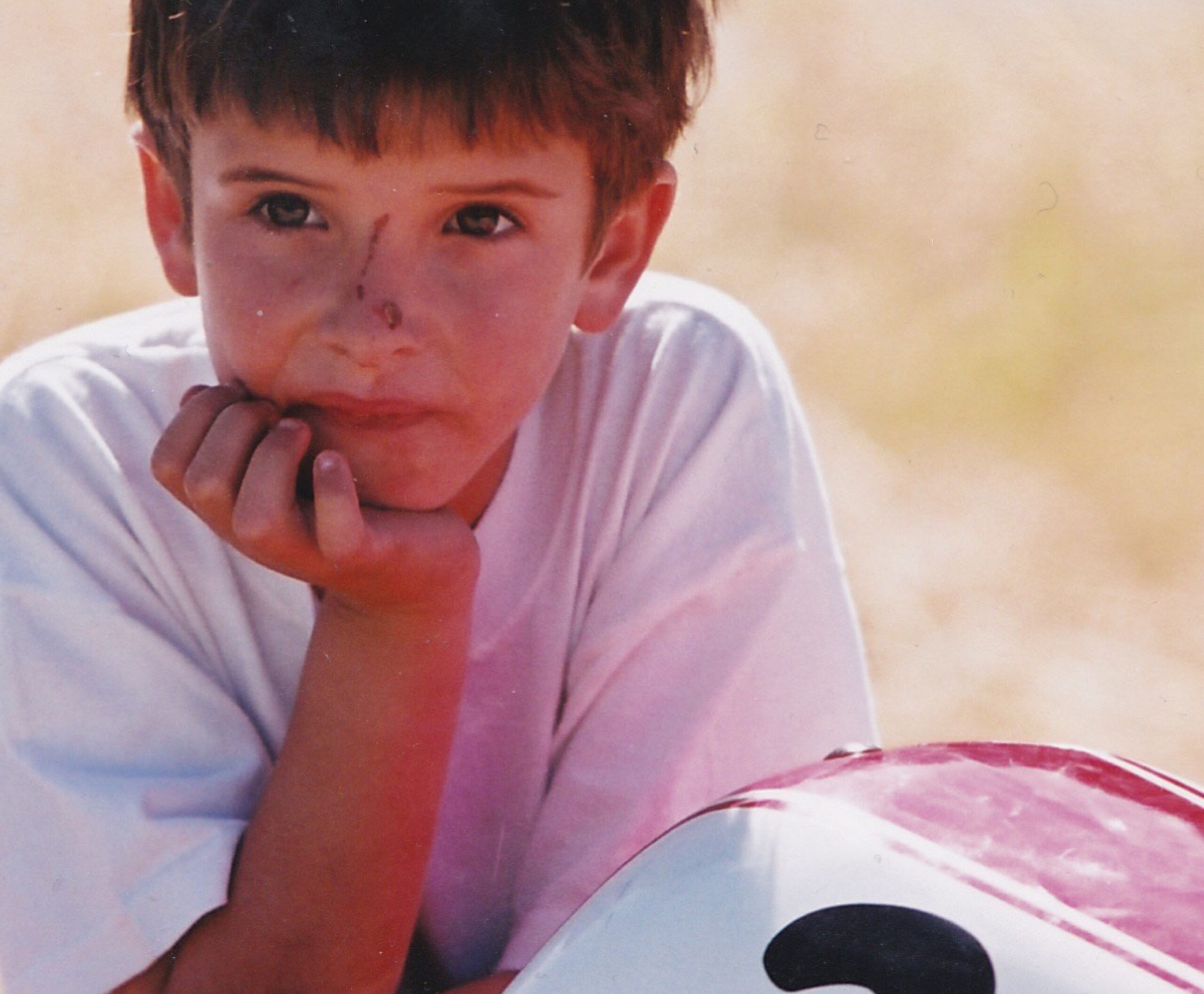 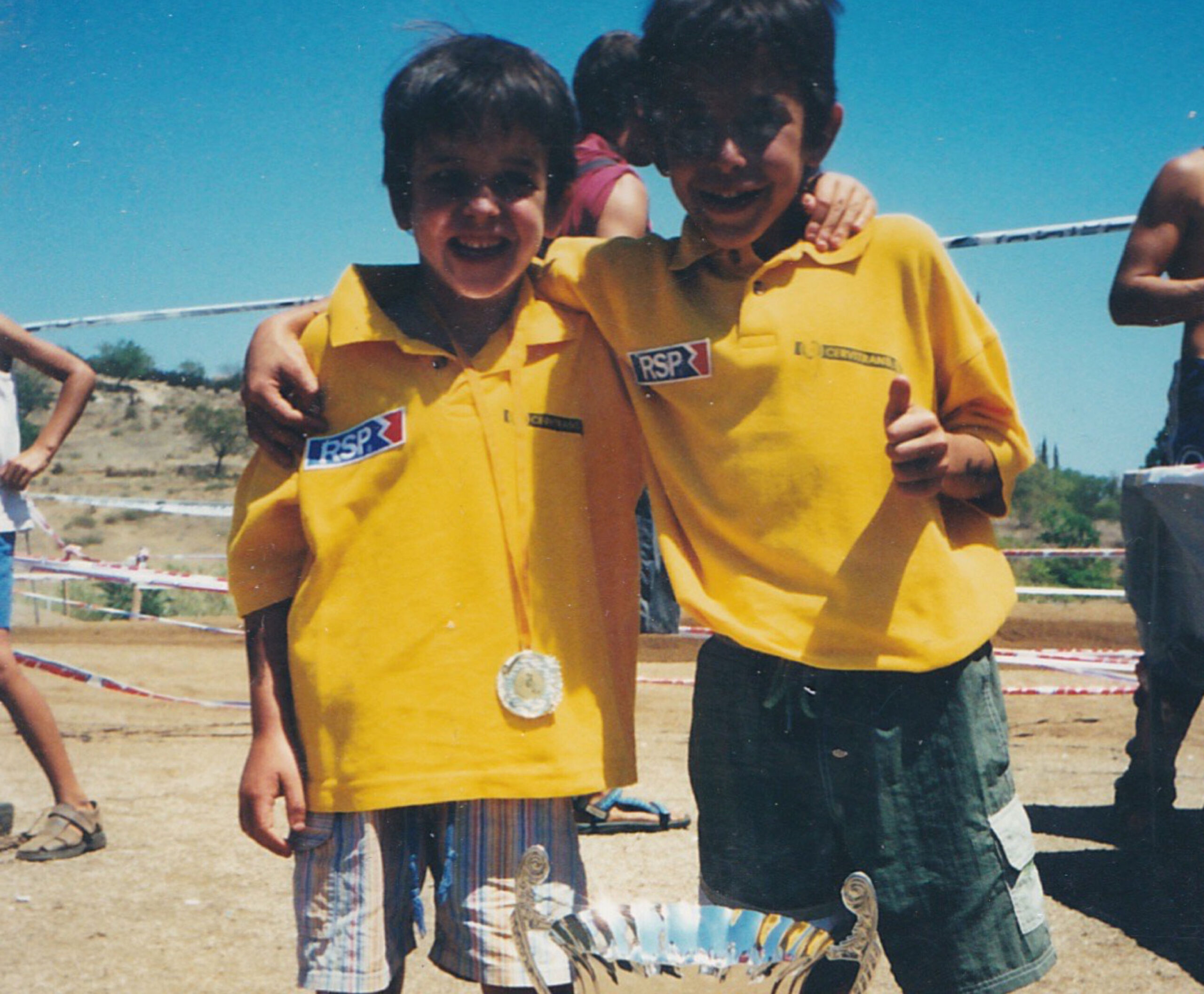 I began to ride bikes when I was a child, always observing and following what my brother was doing. At the beginning, my idea was not being a pilot, I just wanted to go to the circuits to see the bikes with my family and, if I could, be Marc’s mechanic in the future. But little by little motorbikes captivated me…

In 2004, with only 8 years old, Alex Márquez competed in the Promo Racc 50cc being runner-up. The following year, in 2005, he repeated the category, but this season rising to the top of the podium being champion. This championship was the first title for the rider from Cervera.

In 2006, after having been a champion in 50cc, Alex Márquez changed his category and participated in the Promo Racc 70cc, repeating in the same category the following year, 2007, achieving the second place this season, with more experience and being more adapted to the category.

Alex Márquez did his debut in the 2010 CEV Championship. He had to wait until the second race of the season to participate, as the minimum age to participate was 14 years and he was five days younger for the first race.

On his second season at CEV he won his first race in Motorland Aragón with Monlau Junior Team. It was an intense year of learning. He arrived to the last race with  two victories and two second finishes on my belt, so had changes for the tittle in the last race. Unfortunatelly, a fall in the last laps left him with the second position of the CEV championship.

In 2012, with more experience, I was at the front all the season and I won the Champion of Spain tittle. I also debuted at the Moto3 World Championship, with some wild card in the spanish races and racing the last part of the season with the Ambrosio Racing Team.

2013 was my first season in the World Championship with the Team Estrella Galicia 0’0 and a great chance to learn all the circuits of the championship. I won my first GP at Motegi and I was proclamed as Rookie of Year in the Moto3 category.
In my first race with the KTM in Losail I got close to the podium, but I had to wait until Indianapolis to win my first podium. A few weeks later I won my first race in Japan. 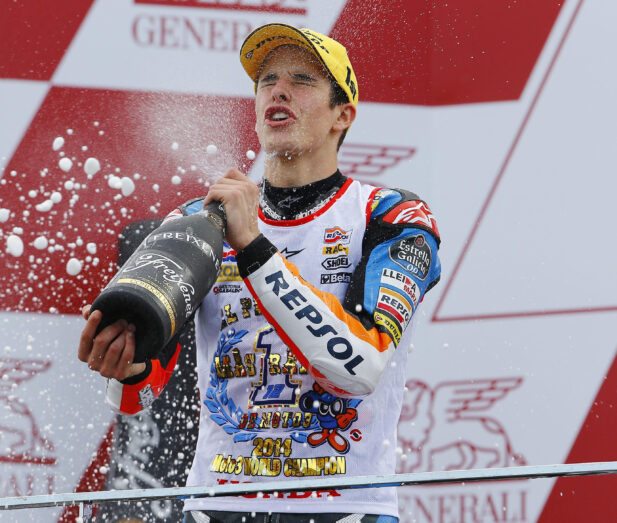 My second season in Moto3 was my first chance to fight for the tittle. The Estrella Galicia 0’0 Team choose Honda engines this time and the bet was worth. Valencia was a great party with a dramatic finish with the australian Jack Miller, who fought against me for the tittle until the last race. 10 podium finishes and 3 victories was an unforgetable balance, but the most important was to win the World Champion tittle.

It’s my first season in Moto2 in the Marc VDS Estrella Galicia 0’0 Team. I look forward to get a lot of experience and fight to be more competitive race by race.

It is Alex’s second year in the intermediate Moto2 category, with the same team, Team EG00 MarcVds. This season Alex Márquez gets his first podium, finishing second in the GP of Aragon.

In 2017 Álex Márquez faced his third season in Moto2 getting a total of 6 podiums and 3 victories (Jerez, Montmeló, Motegi).

2018 was not an easy year for Álex Márquez with complicated moments and instability in the team. Even so Álex got 6 meritorious podiums and finished the World Championship in 4th position. 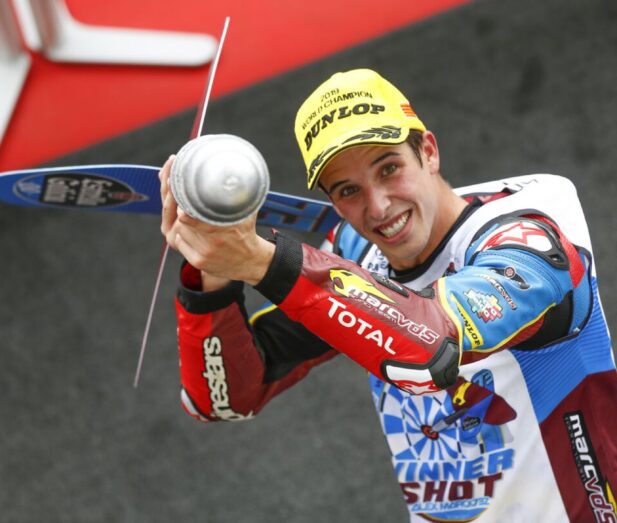 2019 was a historic year for Alex Márquez. After a complicated beginning of the season, both he and the team were very focus in their job and they could get a total of 5 victories, three of them consecutive in France, Italy and Catalonia, in addition to another 5 podiums. With this regularity and being competitive the whole season he arrived in Malaysia in the penultimate race of the year and there Alex Márquez was proclaimed Moto2 World Champion. In this way Alex already became a double world champion after winning the Moto3 title in 2014. This great season opened the doors of MotoGP, and after the last grand prix of the year in Valencia, his signing was confirmed by the Repsol Honda team. 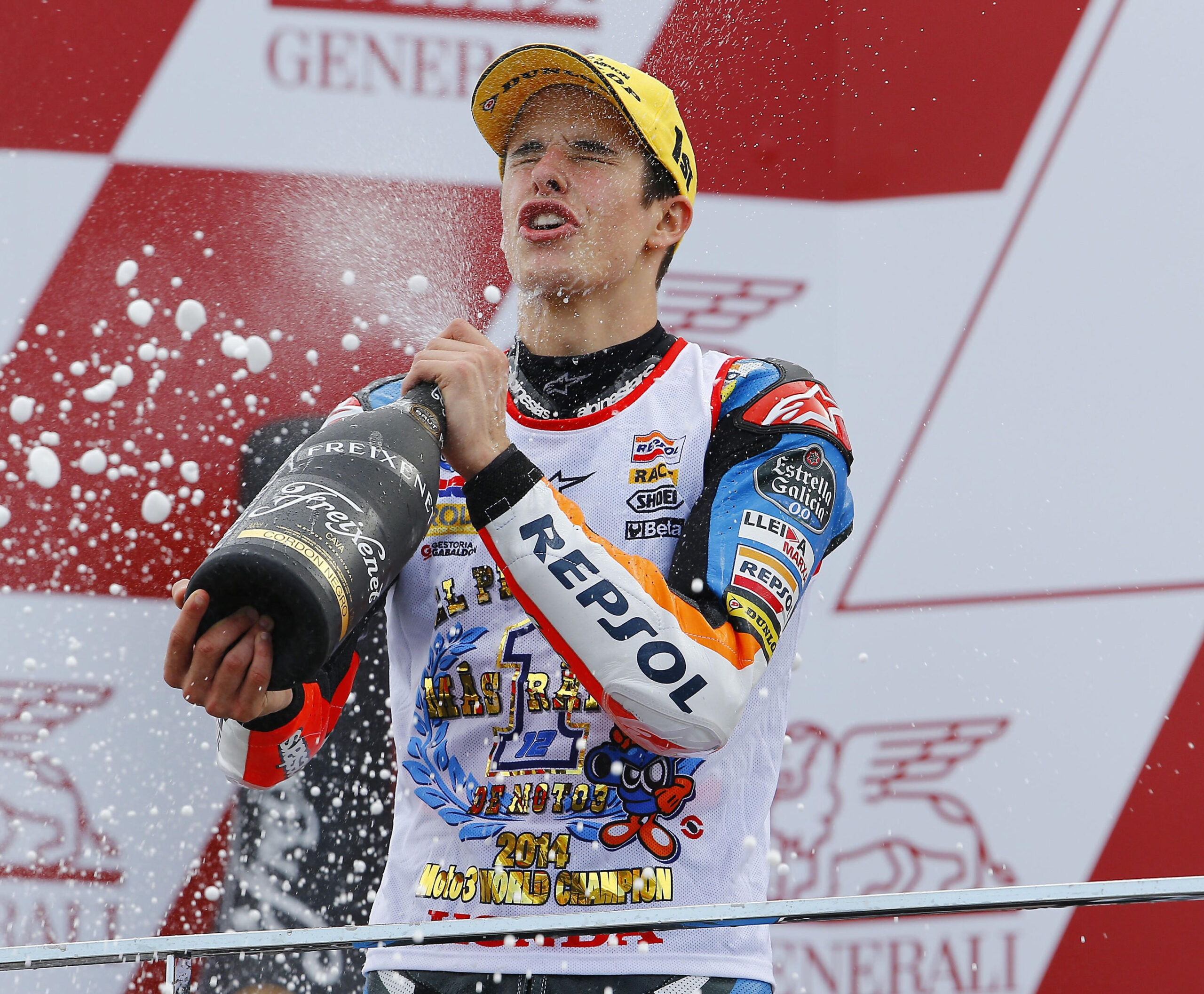 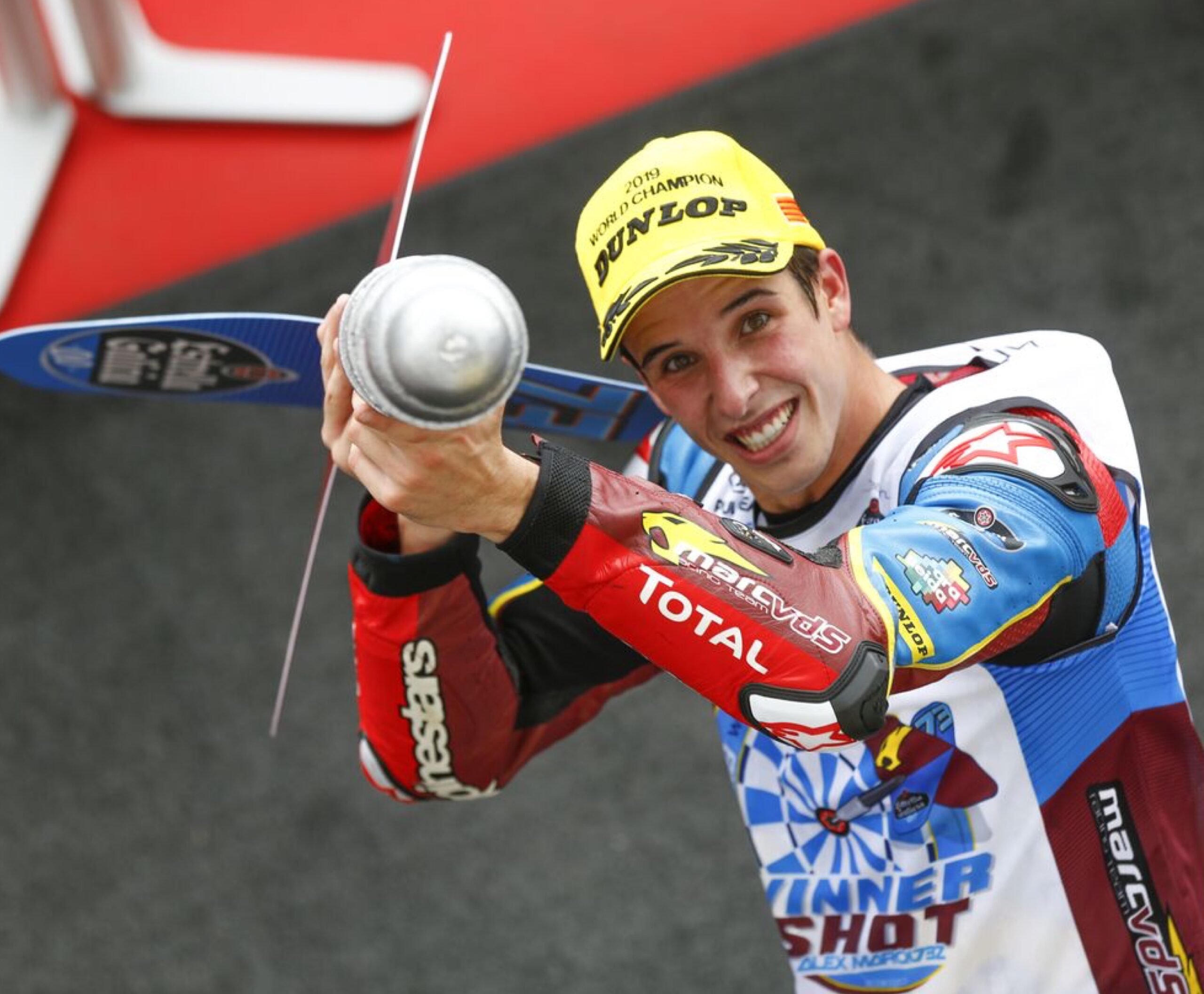 Alex started competing with the number 23, which coincides with the day of his birthday: April 23, 1996. At the age of 13 he started the season in the CEV (Spanish Speed ​​Championship) in the Team Monlau Competicion and the following year with this number he became the Champion of the CEV in the Moto3 category, reaching his goal before jumping into the World Championship with a fixed place.

In 2013, upon reaching the World Championship, the number 23 was already being used by Niccoló Antonelli. So he had to go for number 12, a number that he personally likes very much. In 2014 it was a great season in which he had three victories and most importantly, he achieved his goal of being Moto3 World Champion, so the 12 was also a number that gave him a lot of luck.

After the title won in 2014, he jumped to the Moto2 category, and the number 12 was held by one of the veterans, Thomas Luthi. The other number, 23, also had an owner, belonging to the german Marcel Schrotter, so he had to use his imagination to choose a new number that would bring him luck like the previous two. This number was 73 and he chose it by subtracting the year of his birth, 96, with the day of his birth, 23. In this way Alex Márquez chose 73 as the number, and in 2019, with this number he also achieved his goal, be the Moto2 World Champion.