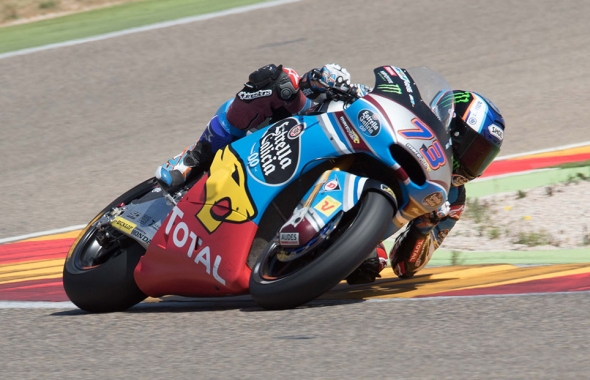 Alex Márquez today completed a two-day test at the Motorland Aragon circuit in Spain. It was a positive test for both riders, despite intermittent rain showers slightly disrupting proceedings on the second of the two days.

Jerez race winner tested a frame modification requested by the team over the course of the two-days, running back-to-back comparison tests with the standard Kalex chassis he has campaigned in the four races so far this season.

Márquez also tested a new front fork from Öhlins on the standard chassis, with positive results. The Team Estrella Galicia 0,0 Marc VDS rider declared himself happy with both his pace and consistency over the course of the two-day test.

Alex Márquez: "I'm happy with the two days here at Motorland Aragon, mainly because we've been able to confirm the direction we took with the bike for the first four races was the correct one and that we are working in a good way. We tried many things on the bike, so it wasn't possible to push for a one-off fast lap, especially with the rain today, but the rhythm was really good and the feeling was like Jerez, with everything coming easy. Now we head to Le Mans for the next race. The circuit has been resurfaced since the last time we raced there, but in the past it's been a good track for us and we go to France looking to push for a good result like we did in Jerez."