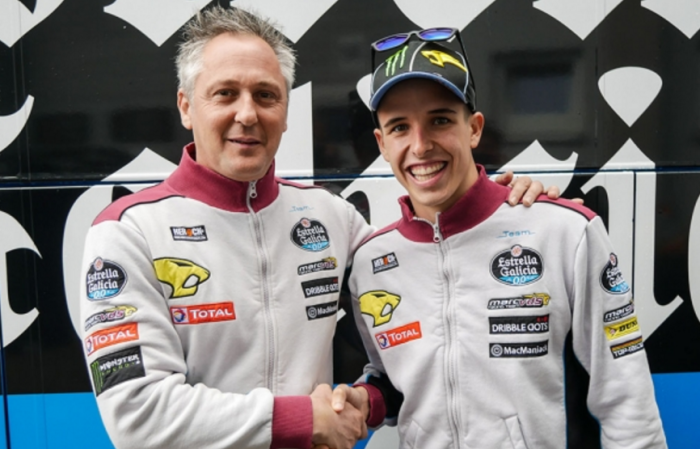 Márquez to remain at Team Estrella Galicia 0,0 Marc VDS in 2017

Team Estrella Galicia 0,0 Marc VDS announced that they have reached an agreement with Alex Márquez that will see the former Moto3 World Champion remain for a third season in Moto2 with the team.

Márquez was crowned Moto3 World Champion in 2014 and stepped up to the intermediate category with Team Estrella Galicia 0,0 Marc VDS the following season, racing alongside the then reigning Moto2 World Champion Tito Rabat.

Fourth places at Brno and Silverstone were the highlight of Marquez’s debut year in the class and, while the 20-year-old Spaniard has endured a difficult start to the 2016 season, the team remain confident that he has the potential to be a front-runner in Moto2.

Alex Márquez: “I am happy to have secured a third year with Team Estrella Galicia 0,0 Marc VDS in the Moto2 World Championship and I want to say a big thank you to Marc van der Straten and the team for continuing to believe in me. It’s been a difficult season for me so far, but I’m determined to repay the team’s faith in me in the second half of the year. My first Moto2 podium finish has proved more elusive than I expected, but that’s now my number one goal in the 10 races remaining in 2016”.

Michael Bartholemy: Team Principal “I’m happy to have secured Álex for another year. Yes he’s had a difficult start to this season, but we can see he has the potential to be a championship contender and I’m confident we can help him realise that potential, as we’ve done in the past with Scott Redding, Mika Kallio and Tito Rabat. I was keen to do this deal as soon as possible, to relieve some of the pressure on Álex that has built up due to the results this year. Now he has a deal done for 2017 the pressure is off and he can focus completely on improving his performance and his results in the remaining races, starting this weekend at the Sachsenring”.

Marc van der Straten: President, Marc VDS Racing Team “I’m sure some people will be surprised that we will continue with Álex for 2017, but they shouldn’t be. He’s a former World Champion and, while he’s endured a difficult start to his second season in the Moto2 class, his talent and determination continue to shine through. He never gives up, even after a difficult weekend, but instead works even harder to improve his results. It is this approach that, when combined with the experience of the people around him in the team, makes me confident that it is only a matter of time before Álex is a regular front-runner in the championship”.