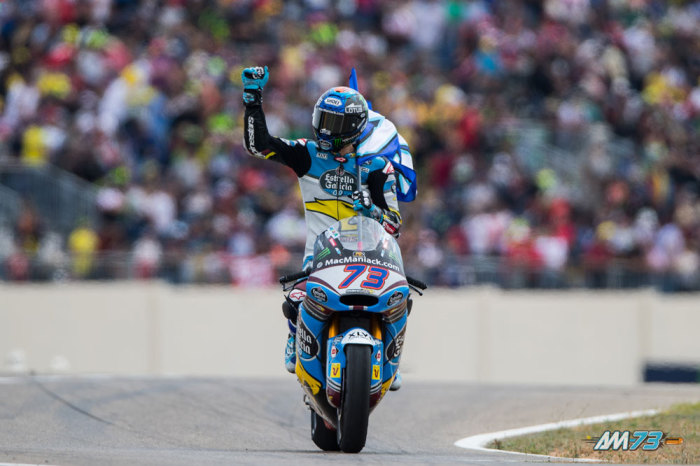 It was a special day for local favourite Márquez with the 20-year-old Spaniard claiming a career first Moto2 podium with a superb second place. It was an emotional celebration in parc ferme for Márquez both with his team and brother Marc Márquez.

In a breathtaking finish Márquez edged his fast-finishing teammate Franco Morbidelli by just three hundredths of a second at the end of the 21-lap encounter at Motorland Aragon.

Márquez rode a fast and tactical race from the front row of the grid to control second place from the opening lap behind eventual race winner Sam Lowes. He only came under threat with three laps remaining when Morbidelli closed to within 0.7s as he began his late race dash.

The final corner on the last lap was a nervous moment for Team Estrella Galicia 0,0 Marc VDS as Morbidelli briefly went ahead before Márquez reclaimed second place as the pair took the chequered flag virtually side-by-side.

Álex Márquez: ”I am really happy to finally be on the podium now in my second season in Moto2, last year was not easy for me. I know that a result like this can really build my confidence so this is an important moment for me. At the beginning of the race I felt really good and was able to follow the pace of Sam Lowes. At the end I was struggling a little with rear grip and it was difficult but I was prepared for Franco when I saw him inside on the final corner. I want to thank the team for believing in me; I know it is not easy when a rider has had a lot of crashes. Now I want to keep this level for the next race in Japan”.